Tool Shower for the Groom! 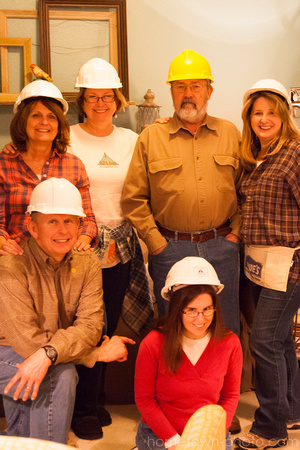 I am blessed to have an incredible group of friends!  We have been getting our families together for over 25 years now for an annual Christmas Ornament exchange.  Fourth of July and a (usually) annual Canton trip have become traditions too.  Our conversations have changed over the years from pregnancy issues, raising babies and toddlers, on to school issues, high school sports, college and now weddings and grandchildren.  One of the joys of this time of life is giving showers for each other's children as they go on to start their own families.  Kathy, Carol, Lorie and I missed having Dianne and Becky at this shower, but they were in our hearts.

Kathy's son, Ryan, and his fiance ,Becca, are getting married in December.  Becca's friends gave her beautiful shower we all enjoyed at her church, complete with doilies and silver and petits fours.  So, we thought it would be fun to throw a tool shower for them and fill up their tool chest with some not-so-pretty, but oh-so-necessary items for their new home.

Of course, for a tool shower, wings and pizza are a must.  Carol, party planner extraordinaire, set up an awesome display for the food.  Even the container for the bleu cheese dressing had a masculine twist! 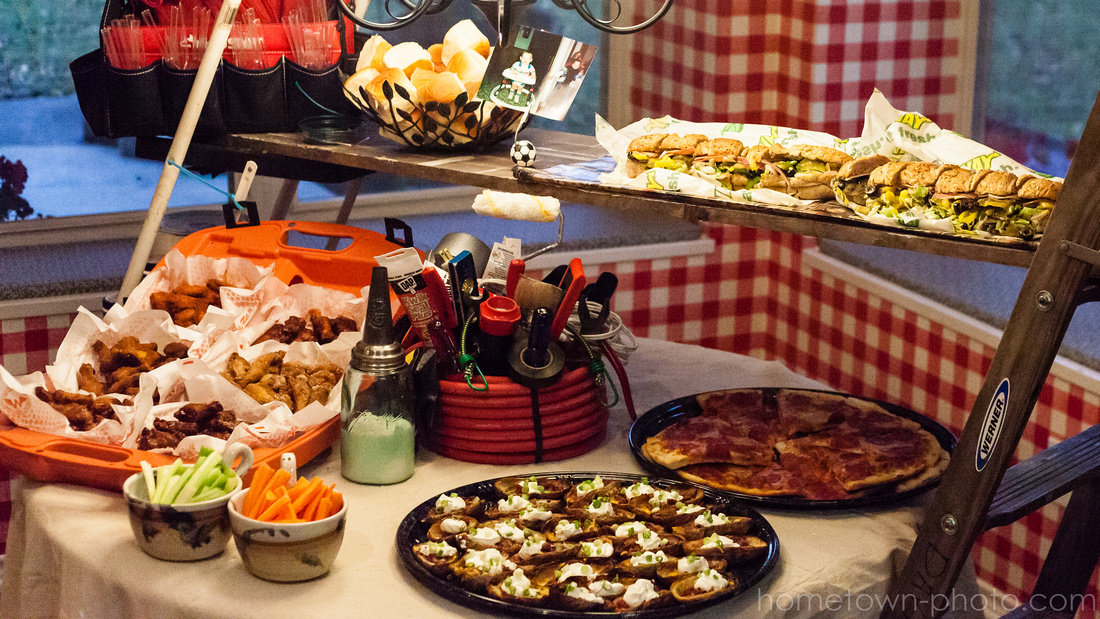 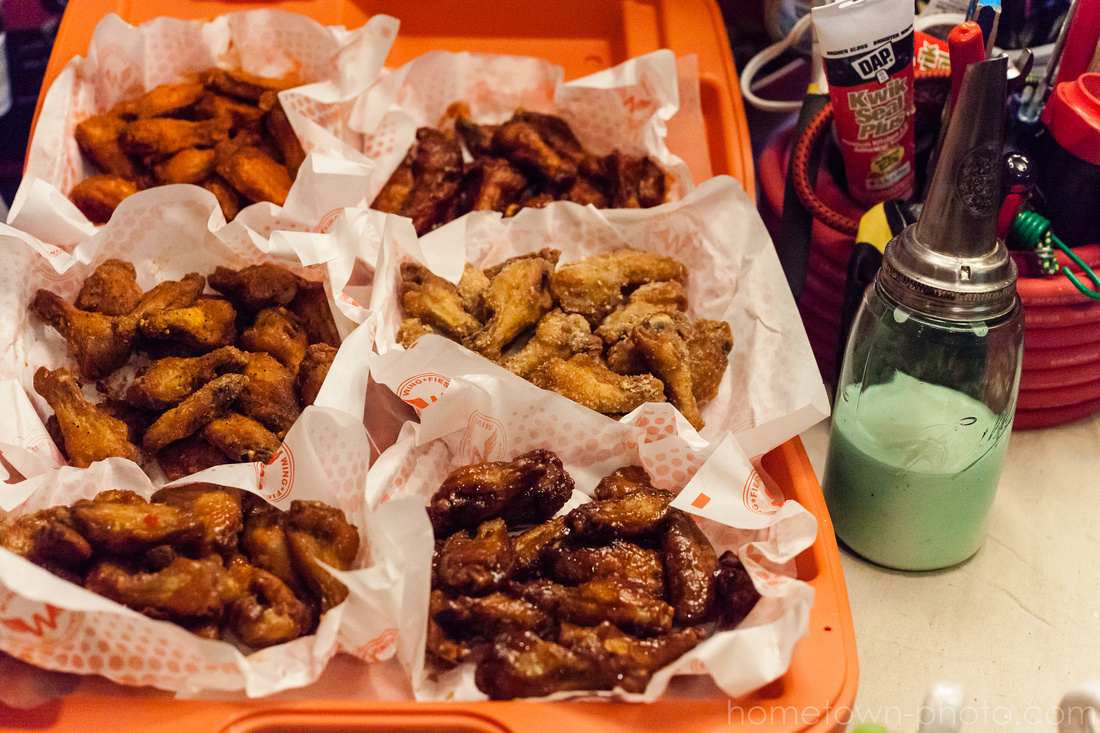 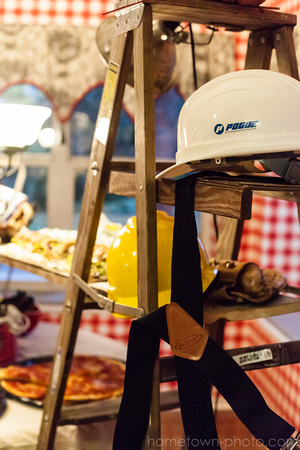 Lorie pulled her blue granitewear plates out of their camping supplies, and Carol added some red shop towels to use for napkins...which her hubby will gladly recycle in his garage! 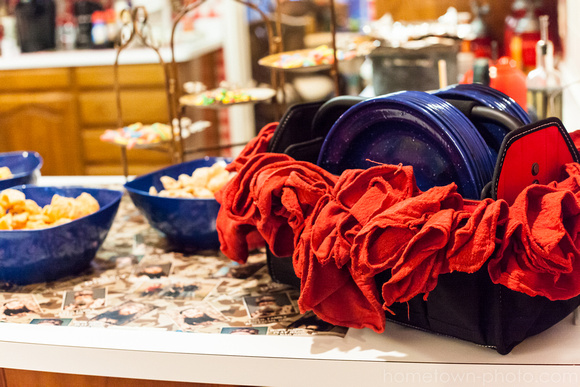 Let's eat!  Ryan and Becca start out the food line...followed by lots of hungry groomsmen and friends! 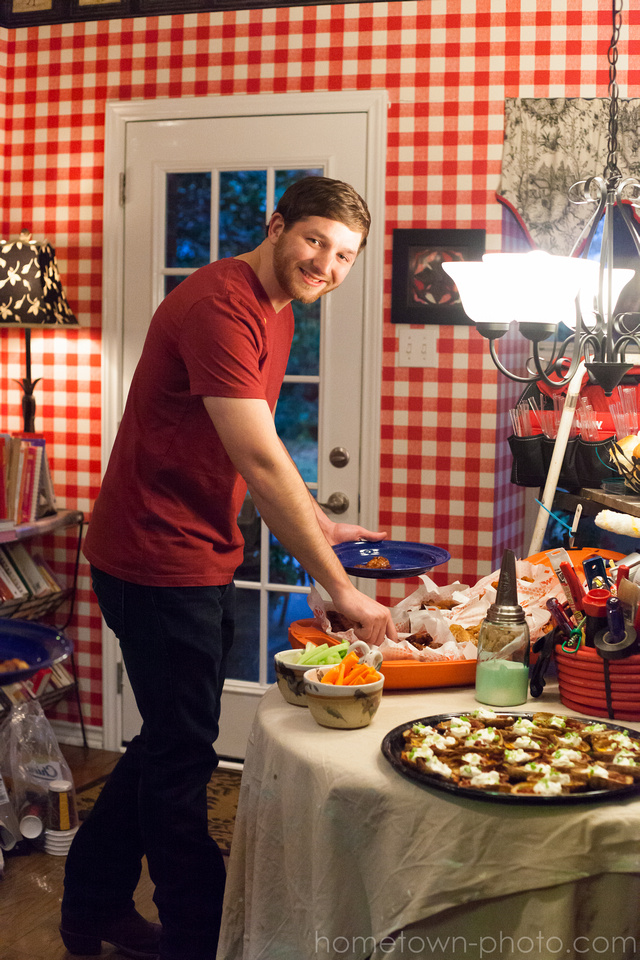 After a little football and wings, it was on to the competition!  The guys were divided into two groups, Team Wedding (with the Father of the Bride as the Captain) and Team Honeymoon (with the Groom as the Captain).   Each team was given a few tools and cardboard boxes.  They were given 10 minutes to build a "Dreamhouse for the Bride."  The bride was ushered away and would come out when the 10 minutes were up to decide the winner.... 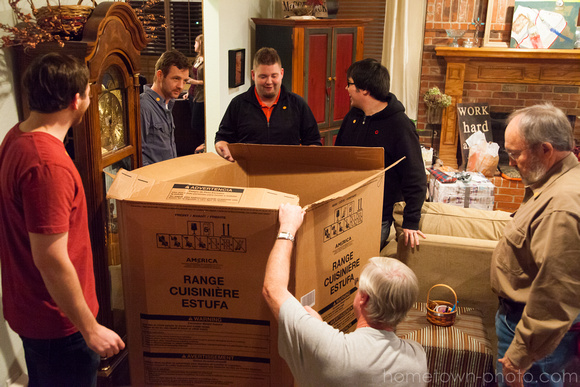 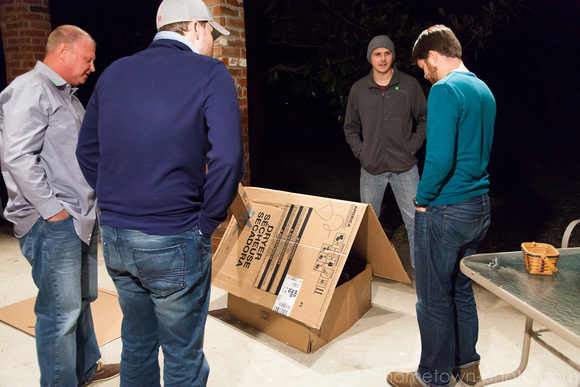 And the winner was...

TEAM WEDDING!  Despite the crooked chimney, the bride was impressed by the "closet space" and the "landscaping":) 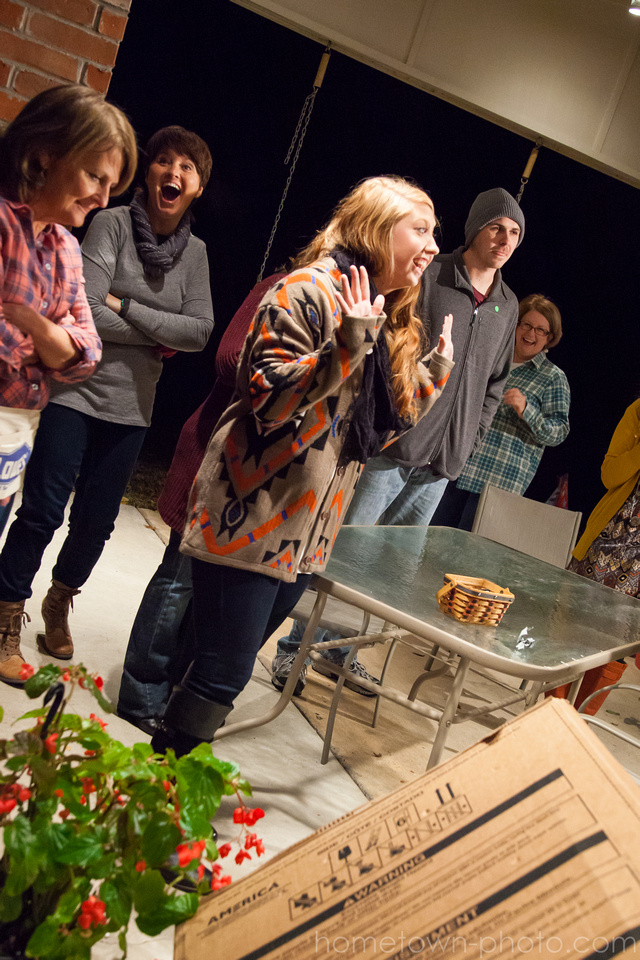 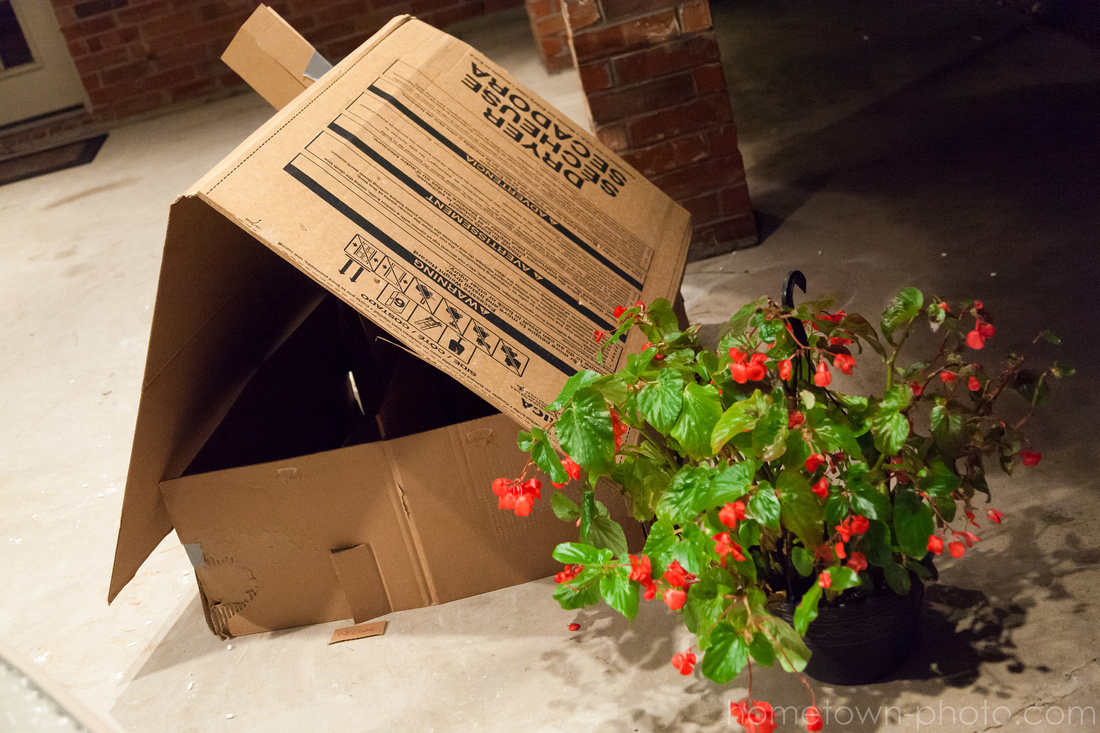 After the competition, it was time to open gifts and enjoy peach cobbler with Blue Bell ice cream! 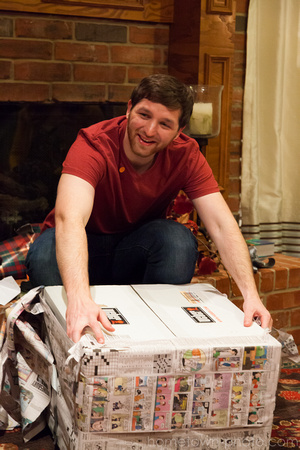 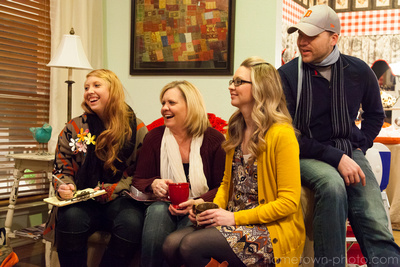 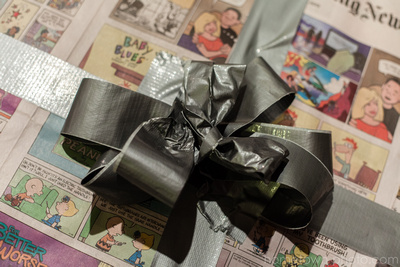 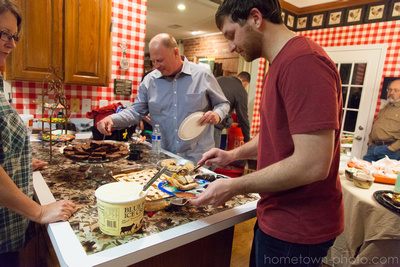 This was very different from the usual petits fours and cucumber sandwiches we usually serve at showers, and the gifts were not as pretty, but they were definitely just as (or maybe more) necessary for "building" a new life together!  Best wishes to Ryan and Becca!

"Therefore encourage one another and build each other up." 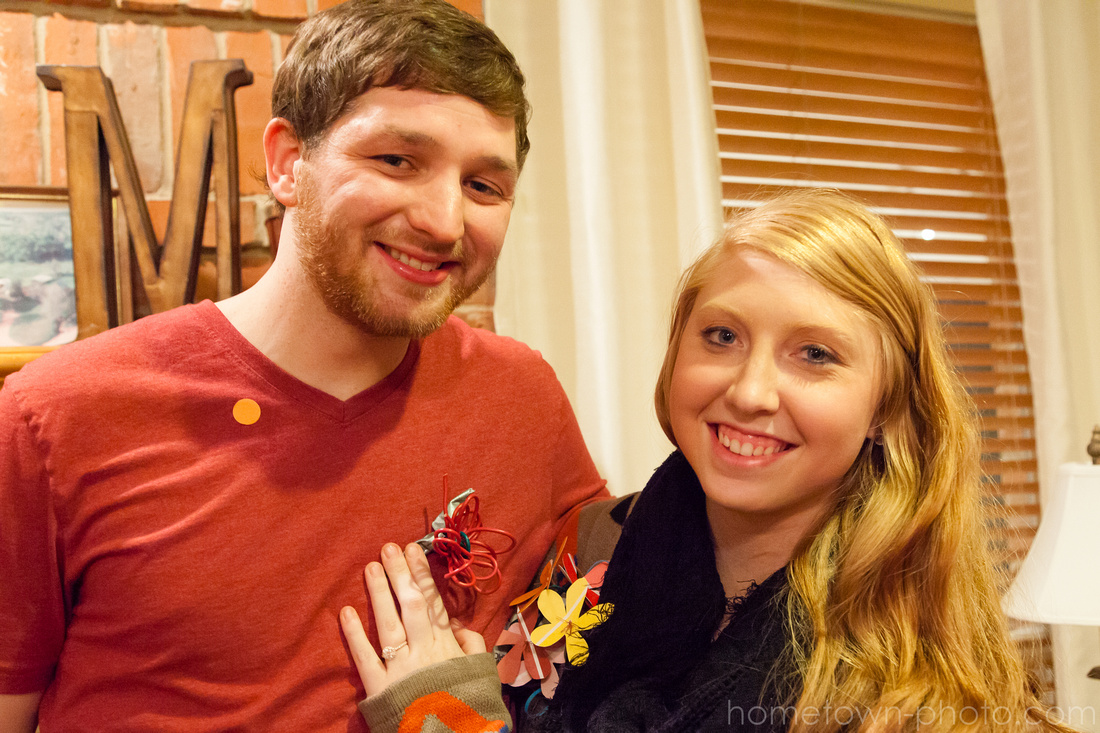 Kathy(non-registered)
Oh my Karen!!!! what a treasure you are to me! The pictures are amazing! How blessed we are to have you and all of our precious friendships. Your beautiful photograhpy is priceless and I can't thank you enough. Love! Love! Love!
No comments posted.
Loading...